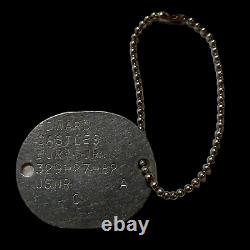 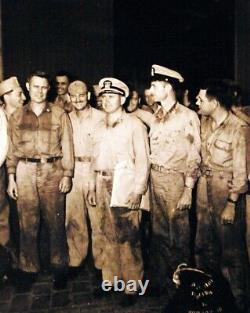 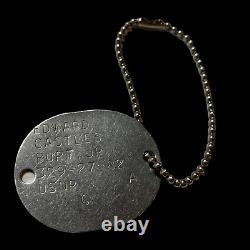 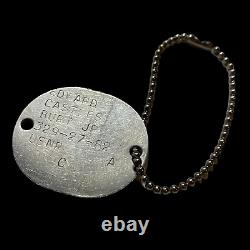 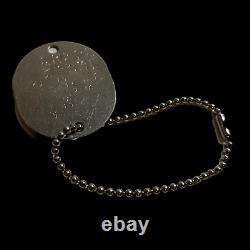 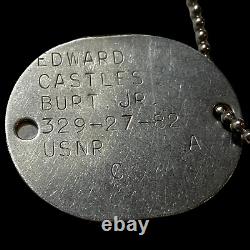 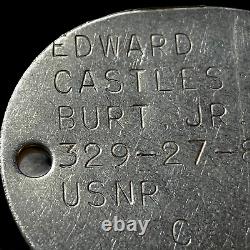 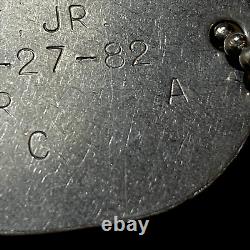 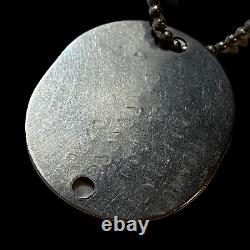 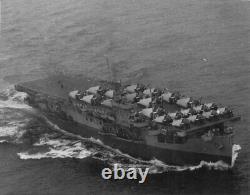 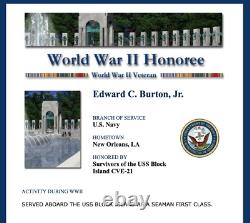 This amazing artifact was worn by a WWII US Navy veteran by the name of Edward C. (shortened Burt on tag) who served aboard the USS Block Island as a Seaman First Class.

Is also noted as a survivor of the USS Block Island CVE-21... The only American carrier sunk in the Atlantic during the war. Block Island was torpedoed off the Canary Islands at 20:13 on 29 May 1944. U-549 had slipped undetected through her screen. The submarine put three torpedoes into the carrier before being sunk herself by Eugene E. Elmore and Ahrens of the screen in 31°13'N 23°03'W. After the Block Island was torpedoed, six Wildcats that were in the air at the time had no place to land, They headed for the Canary Islands, but all of them had to ditch at night after running out of fuel; only two of the six pilots were rescued. The carrier lost 6 men in the attack; the remaining 951 were picked up by the escort screen.

USS Block Island was the first of two escort carriers to serve in World War II. She was named after the island and surrounding sound located off the northeast coast of the United States that is now part of the state of Rhode Island. The USS Block Island was constructed by the Seattle-Tacoma Shipbuilding Corporation and launched on 6 June 1942 by Mrs. The Block Island was commissioned on 8 March 1943, with Captain Logan C.

Originally classified AVG-21, she became ACV-21 on 20 August 1942, and CVE 21 on 15 July 1943. After two trips to Ireland and England during the summer of 1943 with cargos of aircraft, she operated as part of a task group designated to find and destroy German submarines.

During four combat cruises, the Block Island Task Group sank two submarines and shared credit for the sinking of two additional submarines. She earned the nickname of "FBI" for Fighting Block Island. CVE 21 was hit by three torpedos off the Canary Islands on 29 May 1944 by German submarine U-549.

The carrier was sunk with all but six crew members surviving. Of the six aircraft in the air at the time of the sinking only two airmen were recovered. Supporting destroyers sank the U-Boat and rescued the CVE 21 crew. The USS Block Island received two battle stars for her service. The heaviest losses occurred far out at sea where land-based aircraft could not operate. The Royal Navy had experimented with catapult-launched fighter planes from merchantmen; while this was somewhat successful in combating the U-boats, the number of planes that could be embarked was limited.

Something else was needed, and in a hurry. Great Britain appealed to the United States for help. CVE 21 (along with five other CVE's) was actually a C3 tanker hull being constructed to deliver oil to our allies in Europe. The scourge of the German submarine activities, taking the great toll of the convoys underway far out to sea, became a major priority to all of the allied nations due to the fact that the majority of the sinkings were taking place far out of range of any allied aircraft. President Roosevelt and Prime Minister Churchill got together and the United States entered into an agreement to convert several tanker hulls into small aircraft carriers to be provided to Great Britain to roam the vast areas of the Atlantic Ocean seeking out these submarines.

This item is in the category "Collectibles\Militaria\WW II (1939-45)\Original Period Items\United States\Field Gear, Equipment". The seller is "worldwarartifactsandrelics" and is located in this country: US. This item can be shipped worldwide.