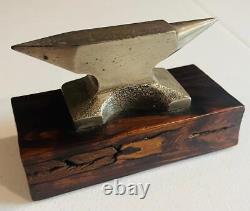 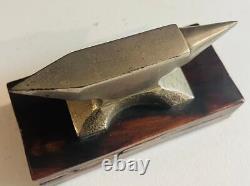 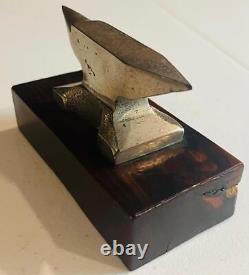 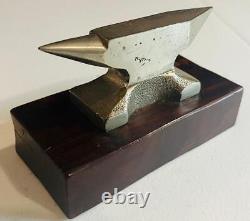 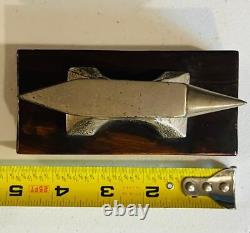 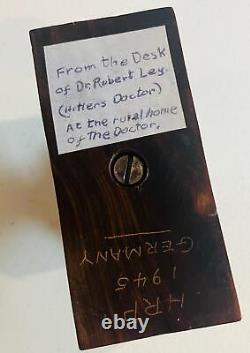 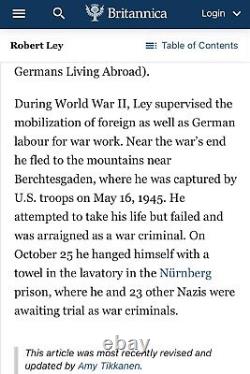 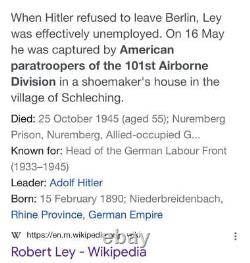 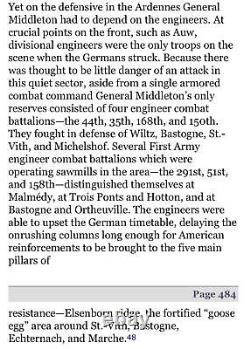 And Very High Ranking Party Deputy. The history and authenticity of this anvil is related to the recollection of the soldier reportedly taking this anvil from the office from Dr. Robert Ley near the end of the war.

He soldier's surviving son will provide a signed, notarized affidavit suitable for framing (and an original photograph of this soldier while deployed near the German border) stating the item belonged to his father and he was one of the family told directly by his father that his father's recounting of the circumstances surrounding how this anvil was obtained by his father were sincere and highly believable. As with most wartime artifacts like this one there is no formal authentication certification. Very compelling though, there are many compelling circumstantial pieces of evidence making this anvil very plausibly being the property of Dr. So here is the story from the owner, a WW II veteran who served in Patton's 3rd Army with the 44th Combat Engineers, in WW II. Sometime around the Battle of the Bulge, this soldier was advancing in an armored column somewhere behind elements of other U.

Forces including the 101st Airborne, which they frequently maneuvered alongside after Patton relieved the 101st at Bastogne December 26-27, 1944. The 44th Engineers played a key roll in the relief of the 101st Airborne under the direct command of VIII Corps led by General Troy Middleton, serving under General Patton. Before, starting in the summer-fall of 1944 and continuing after the 101st were relieved at Bastogne by Patton and VIII Corps, the 101st and 44th remained attached to elements of VIII Corps. Combined with, and including other Combat Engineers Battalion, they continued to press into Germany. Late in the war, Dr.

Ley had fled in fear from Berlin to a countryside in the town of Schleching where he was captured on May 16, 1945 by soldiers of the 101st Airborne. He was living in a shoemakers home. So here are the points worth consider that compel the possibility this soldier/owner of the anvil is true.

The timeline of Patton's 3rd Army movements alongside the 101st Airborne coincide in this area. Ley was captured the story of this soldier entering the abandoned shoemakers house is plausible and believable.

The soldier, stated and placed on the anvil a handwritten note back in the 50's stating the anvil was taken off a desk used by Dr. Ley was referred to by the villagers as "Hitler's doctor". Although he was a Doctor of Chemistry, it is believable that villagers, who heard him called doctor and also knew of his importance as a confidant of Hitler. Members of the 44th Combat Engineers then enter the house shortly after the arrest of Dr. Ley to conduct a further search. And finally, as to the supporting belief as to why Dr. Rey would possess this anvil. The anvil was on the desk being used by Dr. Since this was a shoemakers house, it is plausible the small anvil was used there to make or repair leather work buckles and other fasteners or adornments before Dr. Rey occupied the house where he apparently took it for his own use. LEASE READ the attached research in photos that ties all these facts together so you can see the relationship between the capture of Dr.

Ley by the 101st Airborne to the 44th Combat Engineers, both attached to VIII Corps under General Middleton reporting to General Patton. This 77 year old WWII metal and leather working anvil is in very nice condition for age and wartime use.

The anvil and wooden base have no cracks or signs of abuse (except for the beautiful natural wood grain exposed), and no corrosion or visible scratches. It has only been stored and never restored or altered. Original WW2 German Officers Marching Compass / Busch / DRGM 86410 NICE #. PLEASE NOTE: This items does not show or display any symbols or markings related to Nazi Germany.

This item is in the category "Collectibles\Militaria\WW II (1939-45)\Original Period Items\United States\Field Gear, Equipment". The seller is "pennoutdoors" and is located in this country: US.