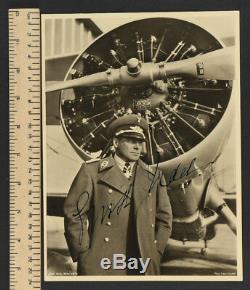 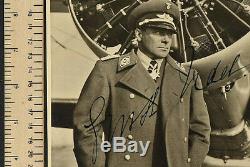 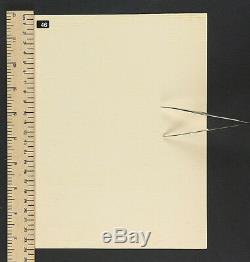 " THE SIZE IS NOT POSTCARD ". Photo Signed: " ERNST UDET ", in iron gall ink. 9 1/2 x 7 In. Ernst Udet (26 April 1896 / 17 November 1941) was a German pilot and air force general during both World War I and World War II. He joined the Imperial German Air Service at age 19, eventually becoming a notable flying ace of World War I, scoring 62 confirmed victories by the end of his life.

The highest scoring German fighter pilot to survive that war, and the second-highest scoring after Manfred von Richthofen, his commander in the Flying Circus, Udet rose to become a squadron commander under Richthofen, and later under Hermann Göring. In 1933, Udet became involved in the early development of the Luftwaffe, where he was appointed director of research and development. Influential in the adoption of dive bombing techniques as well as the Stuka dive bomber, by 1939 Udet had risen to the post of Director-General of Equipment for the Luftwaffe.

The launch of Operation Barbarossa, combined with issues with the Luftwaffe's needs for equipment outstripping Germany's production capacity, caused Ernst Udet to commit suicide on 17 November 1941 by shooting himself in the head. Without doubt, one of the best aviators the world has ever seen, he was a flying genius. From a very young age, all he wanted to do was be in the clouds. Flying free and making a worthwhile contribution to the war effort. Having knowledge of his abilities, Hitler appointed him Director of Research and Development.

The item "WW2 German Luftwaffe Autograph ERNST UDET Signed Photo in 1934 9 1/2 x 7 Inch" is in sale since Friday, May 10, 2019. This item is in the category "Collectibles\Autographs\Military". The seller is "santiagofrancisco2014" and is located in Badia Palma.