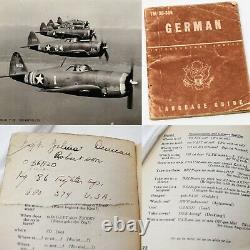 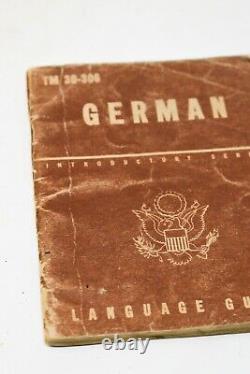 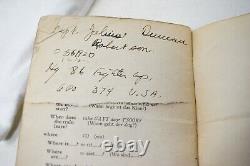 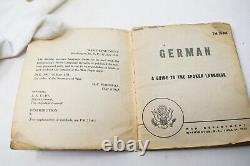 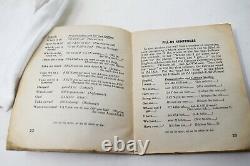 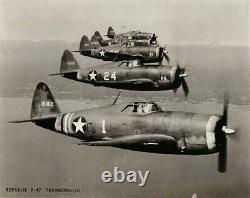 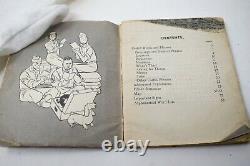 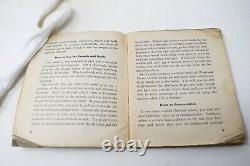 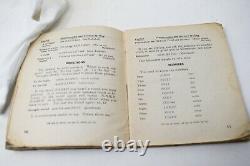 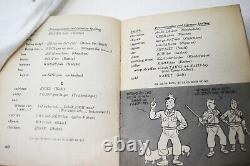 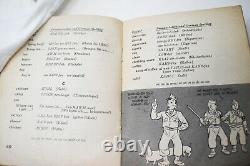 A very rare German survival translation book that was carried throughout the entire duration of the war during his flights by pilot Captain Robertson. Captain Robertson participate in nearly every operations with the fighter group in Sicily, as well as southern France and then Germany. The 86th Fighter Group was mainly used as a close support unit, and took part in the invasions of Sicily, mainland Italy and the south of France, before ending the war operating over Germany. The group was constituted as the 86th Bombardment Group (Light) on 13 January 1942 and activated on 10 February 1942.

The group was redesignated as the 86th Bombardment Group (Dive) in September 1942. In March-May 1943 the group moved to North Africa, towards the end of the Tunisian campaign. However it remained in training in North Africa until July, and didn't enter combat with the Twelfth Air Force until then. The group operated a mix of A-36 Mustangs, P-40 Warhawks and P-47 Thunderbolts during its time in combat, and was mainly used as a close support unit, although it also flew a few longer range interdiction missions and patrols.

The group entered combat just before the invasion of Sicily. And took part in the final stages of the pre-invasion bombardment before supporting the invasion itself in July 1943. The group was redesignated as the 86th Fighter-Bomber Group in August 1943. In September 1943 the group supported the landings at Salerno. The group was able to move to Paestum on the mainland by 21 September, greeting increased its effectiveness. It then supported the attack on the Volturno Line and the advance towards the Gustav Line. In January-June 1944 the group supported the repeated attacks on the Gustav Line and the advance on Rome, as well as the fighting at Anzio. The group was awarded a Distinguished Unit Citation for an attack on heavily defended German forces on 25 May 1944 during the final advance on Rome. The group was redesignated as the 86th Fighter Group in May 1944. In August 1944 the group supported Operation Dragoon, the invasion of the south of France, from bases on Corsica that allowed it to hit targets in Italy and France. From September 1944 until February 1945 the group's main task was to attack German communications in northern Italy, supported the attacks on the Gothic Line. In February 1945 the group moved to Tantonville, in the north-east of France, after the winter attack on the Gothic Line was abandoned. This was originally seen as the start of a move of the entire Twelfth Air Force from Italy to France, this larger move never took place. In April the group moved again, this time to Braunshardt in south-west Germany. In April-May 1945 the group operated over Germany, attacking the German transport system during the last campaign of the war.

The group received a second DUC for an attack on airfields and convoys in northern Germany on 20 April 1945. This item is in the category "Collectibles\Militaria\WW II (1939-45)\Original Period Items\United States\Field Gear, Equipment". The seller is "worldwarartifactsandrelics" and is located in this country: US.