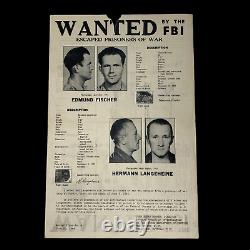 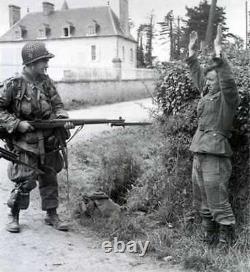 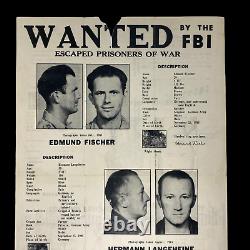 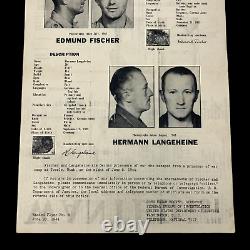 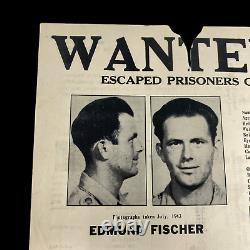 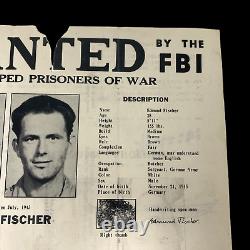 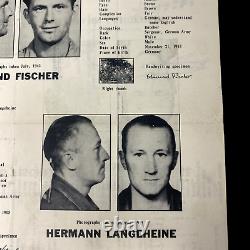 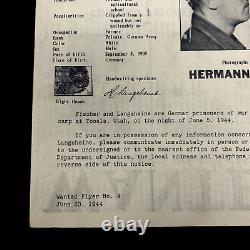 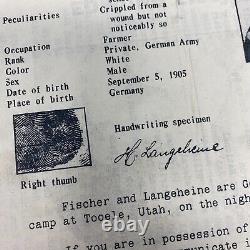 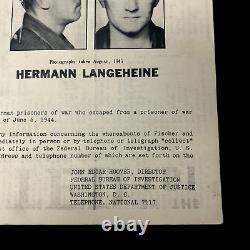 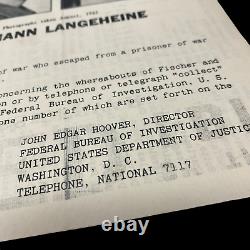 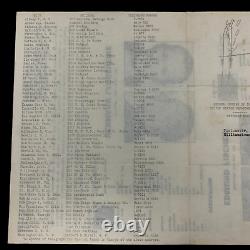 Less than 1% of all German prisoners of war in America attempted to escape, however-about half the rate of. And less than the rate in the civilian prison system. The likelihood of an escapee returning to their forces overseas was very remote. The wish to avoid boredom was the reason most often given by those who attempted to escape. POW's who died during escape attempts usually received military funerals with US government-provided German flags.

On the poster is states that these German POWs escaped from a prisoner of war camp at Tooele, Utah on the night of June 5th, 1944 (just before the Normandy D-Day landings in France). This poster was printed a few weeks following their escape. This WANTED POSTER was printed and constructed by the FBI and is dated June 20, 1944.

This is a large-sized WANTED P. POSTER that includes information about the German soldier's known languages, fingerprints, occupations, and physical completion.

It even has rare handwriting samples. The bottom of the poster is marked under authorization by John Edgar Hoover, Director of the Federal Bureau of Investigations. Members of the German military were interned as prisoners of war in the United States during World War I and World War II. In all, 425,000 German prisoners lived in 700 camps throughout the United States during World War II. After the United States entered World War II in 1941, the government of the United Kingdom requested American help with housing prisoners of war due to a housing shortage in Britain, asking for the US to take 175,000 prisoners. The United States agreed to house them. Although it was not prepared. Its military had only brief experience with a limited POW population in the last world war, and was unprepared for basic logistical considerations such as food, clothing and housing requirements of the prisoners. Almost all German-speaking Americans were engaged overseas directly in combat efforts, and the American government feared the presence of Germans on U. Soil would create a security problem and raise fear among civilians. Despite many "wild rumors" about how the Allies treated their prisoners. Some Germans were pleased to be captured by the British or Americans-fear of being captured by the Soviets was widespread-because they disagreed with their idealism or their nation's conduct of the war.

With as many as 30,000 arriving per month. While they risked being sunk by their own U-boats on the ocean, good treatment began with the substantial meals served aboard. Upon arriving in America, the comfort of the Pullman cars that carried them to their prison camps amazed the Germans.

As did the country's large size and undamaged prosperity. This item is in the category "Collectibles\Militaria\WW II (1939-45)\Original Period Items\United States\Field Gear, Equipment". The seller is "premierrelics" and is located in this country: US. This item can be shipped worldwide.