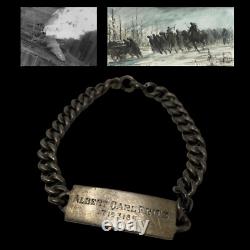 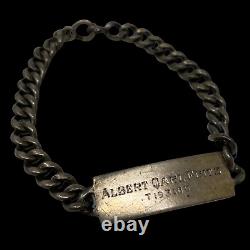 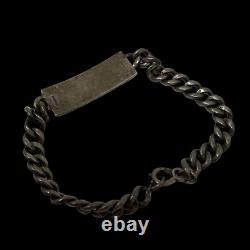 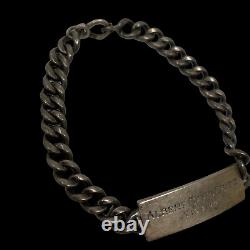 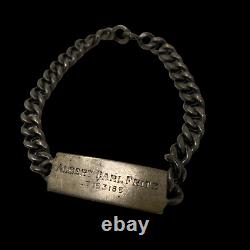 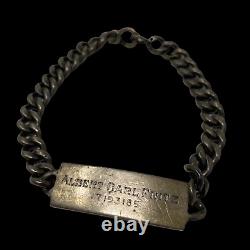 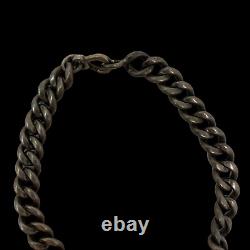 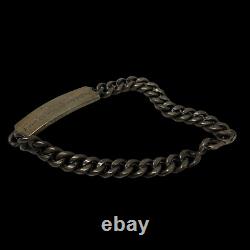 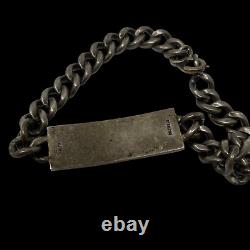 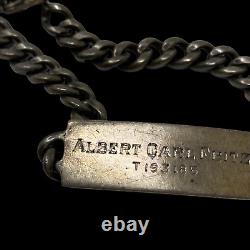 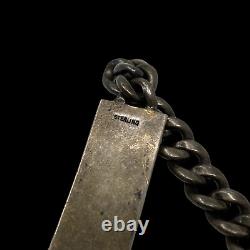 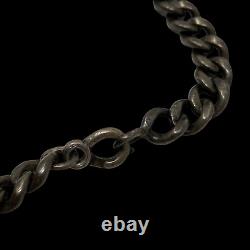 This incredible and historically significant WWII identification bracelet belongs to Albert C. Fritz who served with the 452nd Bomb Group - 8th Air Force as a'Flight Engineer' on the infamous B-17G. What makes this sterling silver ID bracelet incredibly rare is not the Bomb Group Albert C. Fritz served with, however, its significant journey. On his 11th mission Fritz's B-17 was shot down during a bombing raid on March 23rd, 1944. Fritz was extremely fortunate to survive, and was captured by German soldier's shortly after and taken as a POW (Prisioner of War).

Fritz was a POW for 14 months and was soon to become victim of one of German's most brutal war crimes, also known as the "German Death March". In late January, the Stalag Luft IV POW airmen could see the distant flash of artillery fire, which meant an advancing front -- and probably their liberation -- were not far away. On January 28, 1944, 1500 American POWs were sent to Barth (Stalag Luft 1).

No one knows for sure, but they probably numbered about 6,000. Fritz was one of the remaining American airmen left at Stalag Luft 4. Every American POW who experienced this evacuation has his own unique tale of misery, but none is more gripping than the incredible death march made by the men of Stalag Luft IV.

"Luft" means "air" in German, and it designated a camp holding mostly Allied airmen. The 600 Mile Death March. On February 6, 1945, the 10,000 POWs of Stalag Luft IV received their marching orders to move out.

They were told it would take several days. It lasted 86, with the men covering nearly 600 miles.

Prisoners were pressed onward at a grueling pace. Many soon came down with dysentery, diphtheria, pneumonia, typhus, trench foot, and tuberculosis. Frostbite resulted in the loss of limbs, toes, and fingers. Often referred to as "luftgangsters" or "terror fliegers, " the air crews of the Allied air forces were not popular among the civilian population who resided in the cities. Many were marked for death if they crashed in an area where the populace was hostile toward them.

Some crew members were summarily executed if snared by SS troopers or angry mobs of people for delivering such destruction to their homes. During the march, however, the farms that dotted the countryside had not been on the receiving end of such destruction.

Although it was forbidden to trade with the farmers, many guards ignored the rule and looked the other way, allowing the marchers to barter for food. Items such as watches, rings, cigarette lighters, and even chocolate were given up. Men had to procure their own food, and there were scant supplies in the war-torn German countryside. Although they could be shot by their guards, the marchers took to stealing farm animals such as pigs and chickens.

However, such livestock was scarce. Occasionally some Red Cross packages, if they were not already pilfered by the guards, arrived for them. The hunger became so intense that some POWs started eating uncooked rats they had captured.

Sometimes barns, such as the one Steve Stupak was wounded in, were used to find refuge from the winter weather. Although it was warmer, the lice and fleas were everywhere. Also, animal and human feces, plus the hundreds of unwashed bodies, littered the inside of the structures and made the stench unbearable. Some preferred to remain outside and brave the elements. Major Leslie Caplan, one of the few doctors who endured the death march, recalled, Some men drank from the ditches that others had used as latrines.

Dysentery made bowel movements frequent, bloody, and uncontrollable. Men were forced to sleep on ground covered with feces of those who had passed before them. Our sanitation approached medieval standards, and the inevitable result was disease, suffering, and death. It is estimated that 1,300 men perished on the Death March. Wrote, No records were kept, hence only a few cases are documented.

When the men dropped by the wayside or were sent off somewhere supposedly to a hospital, their buddies never heard from them again. The survivors believe that there were many that died on the Death March. Certainly a much greater number died then we are aware of. Eventually, however, the long-awaited liberation came -- in various ways. Some GIs escaped and hid out until they could find an Allied unit.

Three such airmen even stole a twin-engine plane and flew to France. One POW appropriated a farmer's horse and rode toward approaching U. Forces -- with the steed's irate owner not far behind. Other GIs had the relative misfortune to be "liberated" by the Russians, which sometimes meant additional days of confinement at Soviet hands. Most of the POWs, however, simply marched into the glorious presence of American or British forces.

Although these GIs had anticipated deliverance, their bliss was without bounds. "We were elated beyond words, " says O'Donnell. It was a tremendous joy. Finally, in spring 1945, the hideous march was over. From beginning to end it spanned 86 days and an estimated 600 miles.

Many survivors went from 150 pounds or so to perhaps 90 and suffered injuries and illnesses that plagued them their entire lives. Worst of all, several hundred American soldiers (possibly as many as 1,300) died on this pointless pilgrimage to nowhere.

The overall measure of misery remains incalculable. This item is in the category "Collectibles\Militaria\WW II (1939-45)\Original Period Items\United States\Field Gear, Equipment". The seller is "premierrelics" and is located in this country: US. This item can be shipped worldwide.