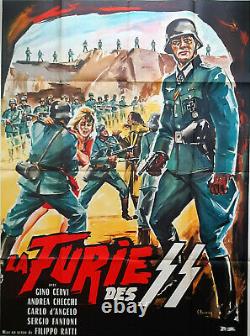 Original title on the poster. TEN ITALIANS FOR ONE GERMAN. IN: 47 x 63 = CM: 119 x 160. Ten Italians for One German - Italian: Dieci italiani per un tedesco (Via Rasella), is a 1962 Italian historical war drama film directed by Filippo Walter Ratti. It is a dramatization of the Fosse Ardeatine massacre.

An Original 1963 (from the first release of this movie in France). The artwork is masterfully illustrating all of the details of Nazi Soldiers uniforms, weapons, emotions of what is happening. Because of its super large size ("Grande") it looks stunning and impressive alive. One of the rarest posters created by famous artist Constantine Belinsky!

In March 1944 twelve German soldiers died in an attack carried out by the partisans in via Rasella, in Rome. The retaliation carried out by Colonel Kappler, with the help of the Rome police chief Caruso, is terrible. Some civilians are captured in the neighborhood of the ambush, then fish are drawn from political prisoners and also from prisoners for common crimes to compile a list of one hundred and twenty people, destined to die in retaliation that will be consumed in the massacre of the Fosse Ardeatine. Gino Cervi, Andrea Checchi, Carlo D'Angelo. Constantin Belinsky studied painting and sculpture at the School of Fine Arts Kishinev. He moved to Paris in 1925 and in 1930 designed his first posters for the cinema. At the same time as his poster artist activity, he sculpts female nudes and practices painting. In its abundant production of posters with structured, expressive compositions and vivid colors, we can cite among the most representative those of the French distributions of the films La Fiancée de Frankenstein by James Whale or Le ciel est à vous by Jean Grémillon. From the unity of democratic anti-imperialist forces of the world, from their determination to fight for peace and security, for genuine democracy and socialism depends the future of the world. DIMITROV Dimitrov Georgi Mikhailov (1882 - 1949) is an activist of the Bulgarian and international communist movement. Dimitrov was called the "Bulgarian Lenin" and the leader of the Bulgarian people.

This item is in the category "Entertainment Memorabilia\Movie Memorabilia\Posters\Originals-International\1940-49".posters" and is located in this country: UA. This item can be shipped worldwide.