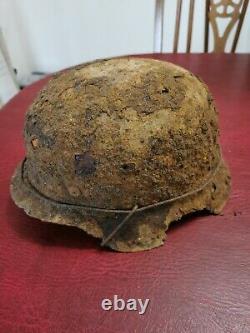 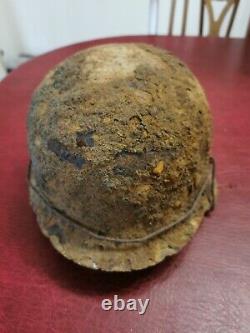 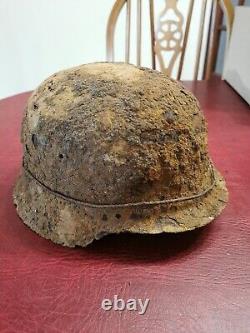 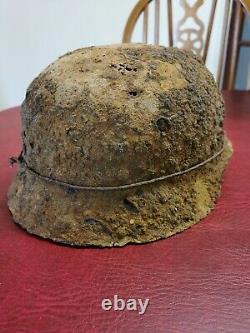 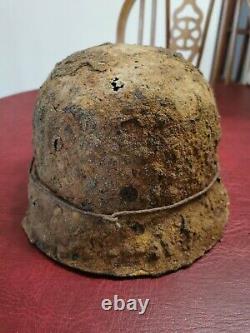 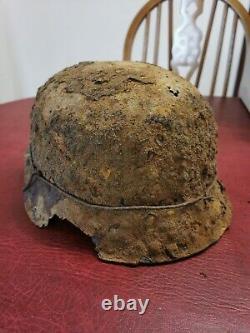 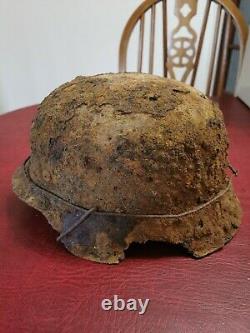 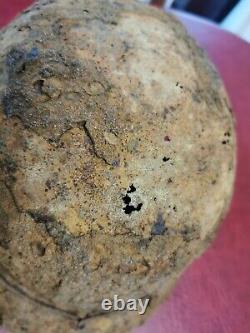 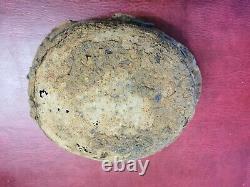 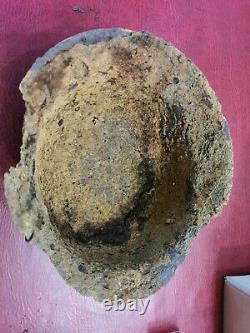 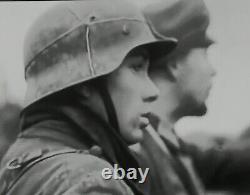 Very rare WW2 original M42 in relic, rusty but solid condition ground dug from German positions in Poland. Helmet has an original and rare wire band added by German soldier in the field. The wire used is typically baling wire. The helmet is still solid but is very corroded.

There are a few pitted holes right through and part of the collar is missing, but it may clean up with some tlc. It has no decals or stamped printing visible due to the rust. There are no signs of battle damage and the liner has been removed. Possibly a KIA, WIA or POW situation?

Possibly an Elite soldiers helmet. In the field, as well as painting helmets in camouflage colors, the Germans often used different materials such as wires, straps, rubber bands formed from inner tubes and nets to attach foliage as well as cloth covers. Wire could easily be fitted onto a helmet serving the duel purpose of both breaking up the outline of the helmet and as a method to attach foliage or scrim. In this case the wire looks to be bailing wire of a typical type and is original to the helmet. The Vistula-Oder Offensive was a Red Army operation on the Eastern Front in the European theatre of World War II in January 1945. The army made a major advance into German-held territory, capturing Kraków, Warsaw and Poznan. The Red Army had two fronts commanded by Marshal Georgy Zhukov and Marshal Ivan Konev. Against them, the German Army Group A, led by Colonel-General Josef Harpe was outnumbered five to one.

In a little over two weeks, the Red Army had advanced 300 miles from the Vistula to the Oder, only 43 miles from Berlin, which was by then largely undefended and was close to the end. An excellent, rare and historical helmet all round. Please examine the photos carefully by way of the description. This item is in the category "Collectables\Militaria\World War II (1939-1945)\Helmets/ Hats".

The seller is "clarkey86" and is located in this country: GB. This item can be shipped to United Kingdom.