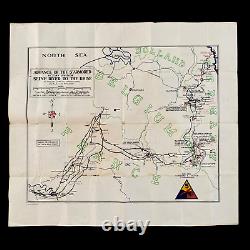 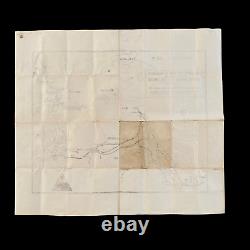 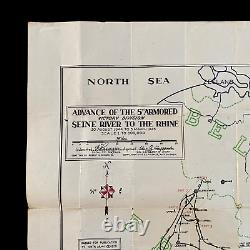 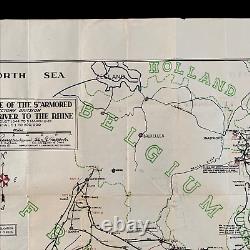 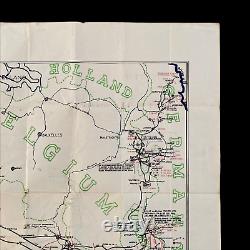 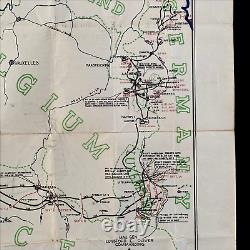 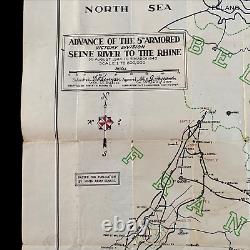 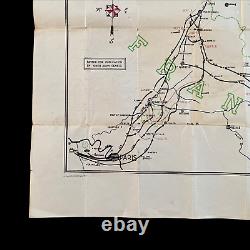 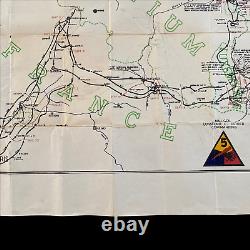 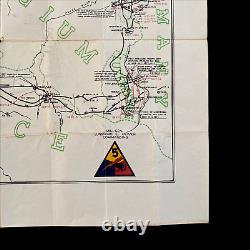 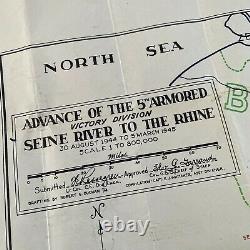 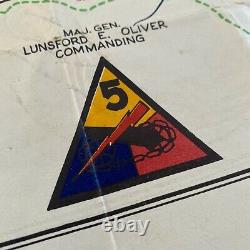 This rare and limited print count 5th Armored Division map was designed by Technician Robert Buchan and issued to members of the division in March of 1945. Because this map was published while the war was still ongoing, they exhibit the necessary Army censorship stamp allowing for distribution. Because this map was printed in the field it is considered a "theater print" making them very collectible.

This incredible European theater-printed artistic 5th Armored Division map poster was published in 1945 while the Fifth Armored Division marched across France and through Germany. This large map provides a detailed narrative of the unit's advance; including movements by individual combat command groups, dates and notes on engagements, and lines of enemy defense. This map begins on the 30th of August, 1944. It shows the unit's movement (though in a smaller scale) by date through the European Theater of Operations (ETO). The action starts with the crossing of the Seine in the lower-left corner of the map.

It was here that the Victory Division was able to finally triumphantly march through the streets of Paris, thronged by adoring crowds that delayed the advance for several hours. From there the various Command Companies sped north towards Belgium, often so quickly that reconnaissance was performed by planes assigned as artillery spotters. General Oliver personally led one armored column nearly 100 miles in a single day (September 2), earning him the Silver Star. Gasoline shortages slowed the advance towards the Meuse, but the Victory Division still managed to secure the first bridgehead across the river (as noted on the map). After crossing the Meuse, the advance towards Germany continued into Luxembourg during the middle of September.

All along the border, Allied troops were closing in on Germany's western border, but it was The Victory Division who would be the first unit to breach the vaunted Siegfried Line in a series of skirmishes on German territory. Both actions are noted proudly on the map. Note that this is one rare instance where a subsidiary unit, the 85th Cavalry Reconnaissance Squadron is recognized for their contribution.

Although the thrust was merely a diversion to draw German defenses away from a planned Allied attack at Aachen, many men in the 5th felt as though the nickname for the division had finally been earned. Both combat commanders earned Bronze Stars for their inspirational leadership. In early October, the march resumed north. The Victory Division would join other units of the U.

First Army in the devastating Battle of the Hurtgen Forest the longest single battle in U. Army history, and numerous other lesser engagements in the winter of 1944, until the last major German offensive, the Battle of the Bulge, began in mid-December. Churchill described this last major Allied victory as This is undoubtedly the greatest American battle of the war and will, I believe, be regarded as an ever-famous American victory - thanks in large part to The Victory Division. This item is in the category "Collectibles\Militaria\WW II (1939-45)\Original Period Items\United States\Field Gear, Equipment". The seller is "premierrelics" and is located in this country: US.